The cultural pole: the civic museum, the cloister of the augustinian fathers, and the church of santa maria della sughera

SANTA MARIA DELLA SUGHERA: a history of regeneration, like cork

The first works date back to the early 16th century, when Agostino Chigi, the contractor of the alum mines, decided to build a church in honour of the Blessed Virgin Mary.

This church is named after an event that took place in Tolfa during the feast of All Saints in 1501. A votive image depicting the Virgin Mary standing beside her Son on a cork tree was found. The following day it was decided to bring in procession this image from the forest – where it had been found – to Chiesa della Misericordia (Church of Mercy).

That night, however, the image disappeared. Then, it was found again the next morning in the place where it had been placed. This episode was interpreted as a divine sign, that is, the clear will of Our Lady to see a church built in her name.

According to some sources, the church was built by architects Sebastiano Serlio and Baldassare Peruzzi.
The works were completed in 1524.

This church and its adjoining convent were once run by the Augustinian Fathers of the nearby hermitage of the Holy Trinity.
In 1552, following a bloody event inside the church, it remained closed for a few years.

It was reopened only in 1560, and then renovated and expanded, as it is today. Ten altars were made: four on each side, and two facing the entrance.
As a plaque on the side of the church tells us, another tragic event for the city of Tolfa took place here. On 15 March 1799, at the end of the long siege by the French Republican Army, 3 priests and 100 Tolfetans were brutally shot by the French troops.

Heavily damaged during the siege, the church and the convent were restored in the neoclassical style of the time between 1801 and 1825.

CONVENT
The convent was inaugurated towards the end of 1521. It was built following the traditional layout: a cloister and a well in the centre. It was organized on two floors. On the lower floor were a kitchen, a refectory, a woodshed and a stable. On the upper floor were the friars’cells.
Between 1801 and 1825 the whole structure, including the church, was restored, but the convent was soon abandoned. After being used for several purposes, restoration work started in 1997. Today, the convent is home to the Tolfa Cultural Centre/Pole, and houses the Civic Museum, the Municipal Library, the Restoration Lab, and the Municipal Historical Archive Giuseppe Cola.

CIVIC MUSEUM
Housed in the 16th-century frame of the former Convent of the Augustinian Fathers, the Civic Museum of Tolfa provides you with the tools you need to understand the local identity, through the knowledge of the former inhabitants of this territory across its sections: Etruscan, Roman, Medieval and Modern.
The museum organizes guided tours that allow visitors to dive into the history of the architectural complex of the Augustinian Fathers, and discover the prestigious collection of works ranging from the Etruscan to the modern age. With the help of the cultural association CHIRONE, the museum organizes educational workshops on archeology, history, nature, and art for young visitors. The Museum Pole is open every day, hours vary according to the time of year. 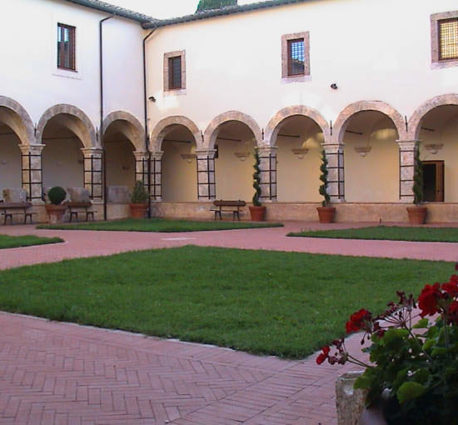 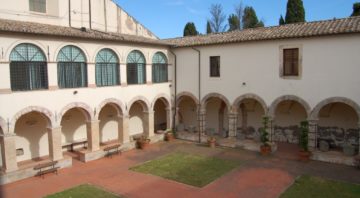