Built in honour of St Egidio Abate, patron saint of Tolfa, and located in the oldest part of the town, its origins are unknown. The church has undergone continuous changes over the centuries, and in 1588 it became a collegiate church at the behest of Pope Sixtus V.

With an increase in the local population and the consequent need for more space inside the church, expansion and renovation work was carried out in 1630. The Capuchin Michele da Bergamo proposed the three naves.
This three-nave church features a high façade that was rebuilt in the 60s.

The large apse at the end of the church is known as ‘the great tower’ (‘Torrione’), the section of walls of the medieval Tolfa, where you will see a St Egidio Abate’s painting. The S. Egidio Abate’s canvas (1636) and the panel painting depicting Christ the Savior on a cloud are of great interest.

In a lateral chapel there is also a Blessing Christ attributed to the School of Antonio del Massaro, also known as Mr. Pastura, an important Renaissance painter well known in Viterbo, Orvieto and Rome, where he collaborated mainly with Pinturicchio on the decoration of the Borgia apartment in the Vatican City.

In the chapel opposite you will see the gilded bust of St Egidio Abate, which is carried in procession on 31 August every year. Below the table is the urn of the martyr St Cristina, which was moved from a catacomb in Via Ostiense to Tolfa in 1733. The bell tower erected between 1547 and 1548 is composed of five bells that ring daily, marking the life in Tolfa.

The Collegiate Church is the oldest church in Tolfa after the Church of the Madonna della Rocca. 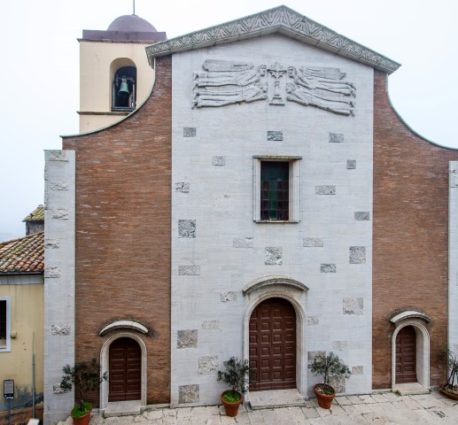 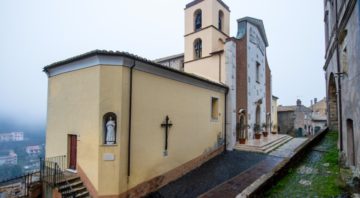 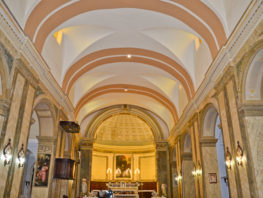